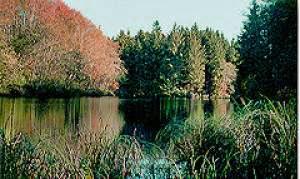 GHC's 125-acre campus is situated in the Chehalis River Basin and is the site of the unique Donald F. Samuelson Model Watershed. An undertaking of students, faculty and staff, this project features nearly two miles of developed "barrier free" nature trails that traverse the site for maximum public access and use.

The one mile loop around Lake Swano, the heart of the project, features fourteen interpretive signs that include information about watersheds, natural history, and poems by former GHC Humanities Instructor, Harold 'Jim' Enrico.

Another eighth of a mile loop that begins near the John M. Smith Aquaculture Center has been dedicated to Louis Messmer, who headed the college’s Life Sciences department for 33 years before he retired in 1986. The trail is called "Lou's Loop Botany Trail" There are twelve numbered stops that correspond to a numbered pamphlet that highlights the botanical description and ethnographical information of each plant.

Take a self-guided tour around the two miles of trail surrounding Lake Swano.

We invite you to walk the trails and watch the seasonal changes of the watershed.

While visiting GHC's Model Watershed, it is important to remember to: avoid damage to plants and erosion by staying on the trail; carry out all your trash; leave only footprints; move quietly, observe more; keep pets on a leash and pickup after them (waste bags provided at trailhead); and no unauthorized wheeled vehicles. 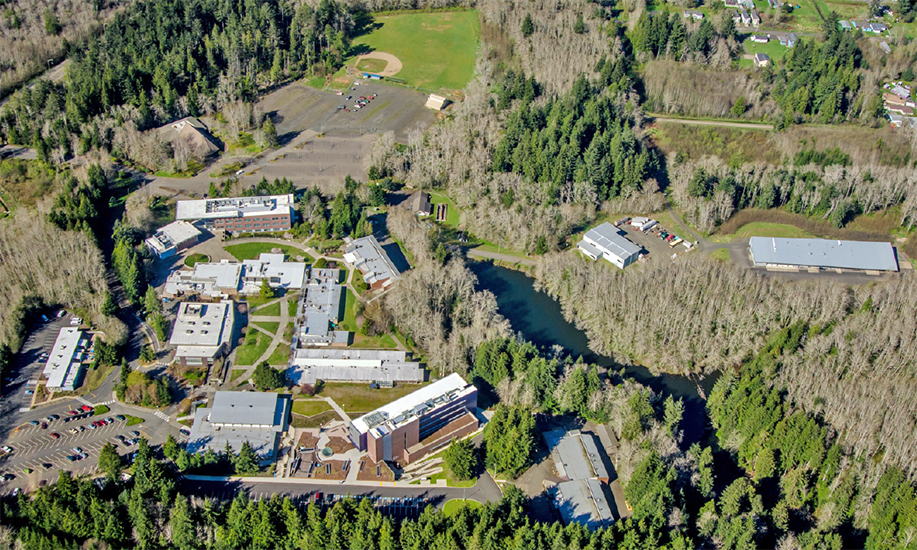 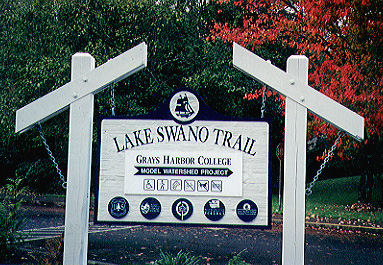 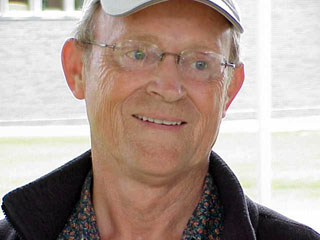 Samuelson began his professional career as Navy radiation health officer aboard the submarine tender USS Sperry AS-12, San Diego, CA, from 1967-70. After earning his master's degree in 1971, he served as an analytical chemist and fish culturist for the U.S. Environmental Protection Agency, Corvallis, OR, working in salmonid toxicology (1971-74). Samuelson then served as a coastal marine field agent for the Washington Sea Grant Program (University of Washington) based at Grays Harbor College (1974-78). From 1978-2004 he directed and instructed the fisheries and wildlife program at Grays Harbor College. Samuelson retired from the Naval Reserve (rank of Captain in the Medical Service Corps) with over 30 years of service (June 1996). He has been a commercial salmon and charter boat fisherman for over 40 years. He currently holds a U.S. Coast Guard masters license (certified to operate 100-ton vessels out to 100 miles offshore).

Samuelson has been certified as a Professional Fisheries Scientist by the American Fisheries Society (AFS) since 1974. He is an active member of AFS, the Pacific Fisheries Biologists Association, and the American Institute of Fisheries Research Biologists.

The GHC Board of Trustees named the Model Watershed in Samuelson's honor in May, 2004.

The History of Lake Swano

The Alder Creek watershed and Lake Swano have a long and colorful history. Human activities, since Europeans settled the area, have played a significant role in the shaping of the present landscape. Early in this century much of the lower two-mile reach of Alder Creek was ditched to drain the low-lying area of South Aberdeen and facilitate street construction and urban development. Lake Swano itself is an artificial lake. 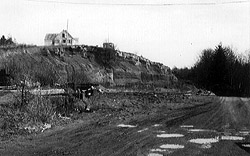 It was created in 1948 by Mr. Swano Katalinich, the owner of a gravel pit located on the east side of Alder Creek. In the process of building an access road to the gravel pit, Mr. Katalinich dammed the stream, forming a small reservoir behind the dam. This reservoir later became known as Lake Swano (Engle, et al. 1996).

In 1962, the college purchased the Katalinich gravel pits, including the lake. During the following year the student council and campus clubs initiated the planning of a Swano Lake Improvement Project. The Engineers Club took the lead on the planning, but the project was never implemented. The project was revisited in 1969 when Dr. Smith and Dr. James Bicknell revised the plans. In 1970, Dr. Bicknell organized the Students for Environmental Action (SEA) group to construct a trail around the lake. A path was cleared along the east and west sides of the lake, but due to an apparent lack of interest and funding, the project was abandoned (Nice, 1989, Engle, et al. 1996).

During the 1970's, Dr. Smith and Don Samuelson, a fisheries instructor, developed a college fisheries program, utilizing the lake and Alder Creek as resources for salmon rearing. The first adult salmon returns resulting from their efforts was documented in 1974. In 1987 an Aquaculture Center, complete with a fish hatchery, was constructed along Alder Creek below the lake. The following year a fisheries habitat interpretive trail was constructed along the west side of Alder Creek, heading north from the hatchery (Engle, et al. 1996). This trail was a joint effort of the college and the Grays Harbor Poggie Club, with funding provided by the Ben B. Cheney Foundation.

In 1984, a Lake Swano Committee was formed to plan the construction of the trail around the lake. Two years later, with funding provided by the Associated Students of Grays Harbor College, the Fish and Wildlife Club greatly improved access to the lake by installing steps down the hillside from the Natural Sciences (300) Building. In 1989 a Trail Planning Team was formed. It included college, as well as off-campus representation. A year later, a foot path was established completely around the lake.

In 1992, the Grays Harbor College Model Watershed interpretive trail construction began in earnest when the college was awarded a Centennial Clean Water Fund grant from the Washington State Department of Ecology (DOE). The aim of the grant was to construct 1.5 miles of interpretive trail, develop water quality education curricula and an implementation strategy, develop and implement a water quality public awareness program, and develop a water quality enhancement strategy for the Lake Swano/Alder Creek watershed (Nice, 1993). Approximately 1.8 miles of trail were surveyed and designed under this project, and with construction assistance provided through Washington State Department of Natural Resources "Jobs for the Environment" funding, roughly 1.4 miles of trail were installed. Curricula were gathered, a curriculum guide was compiled, and a baseline study of the Lake Swano was performed. Interpretation research was conducted; however, funding was inadequate to complete a comprehensive interpretive plan, thus only trail head signs were installed.

Funding for a second phase of the project was awarded to the college by DOE in 1996. This second phase called for the completion of Americans with Disabilities Act (ADA) accessible trails, development of an interpretive plan and installation of interpretive signs, implementation of a watershed education center plan, creation of a public awareness plan, and water quality monitoring and enhancement.

In 1999, community collaborations were established and the accessible interpretive trail was completed. Five years later, in May 2004, the GHC Board of Trustees named the Model Watershed in Don Samuelson's honor.

Today, the trail around Lake Swano is a popular destination for the Grays Harbor community. It has been the site of organized runs and employee fitness challenges. It is a gentle, well-developed loop trail of around 1.4 miles. It is an excellent choice for anyone looking for a quiet area to hike or jog. Leashed dogs are also welcome to enjoy the scenery. Please be a responsible pet owner and use the waste bags that have recently been added to the entrance of the trail.